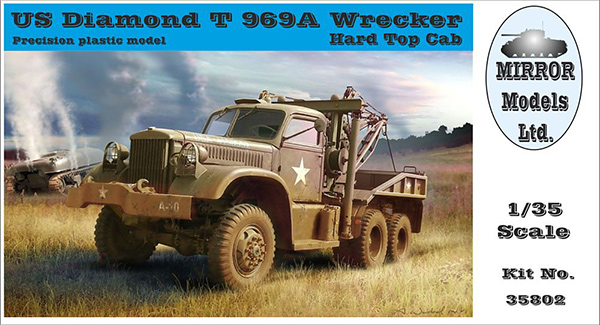 During World War II, the Diamond T Motor Car Company produced a line of trucks that kept both the US and British armies moving. 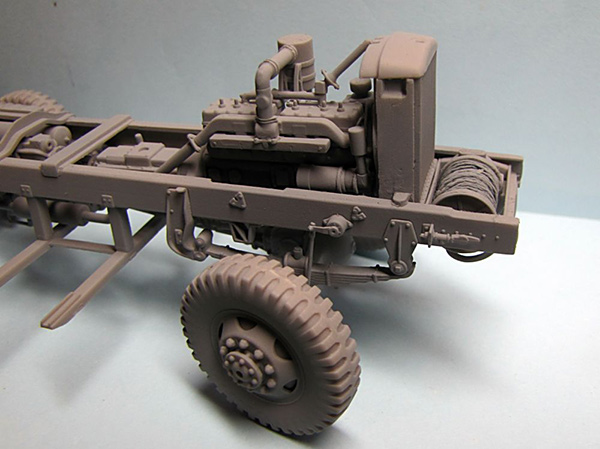 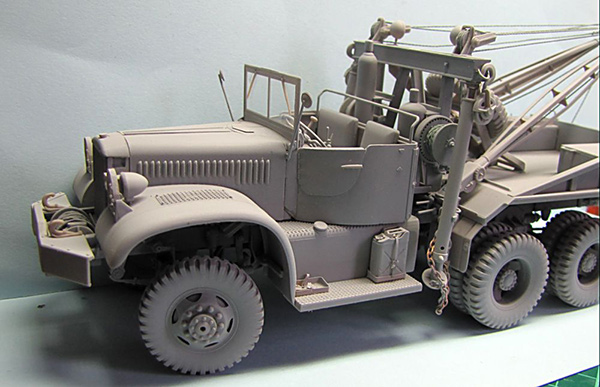 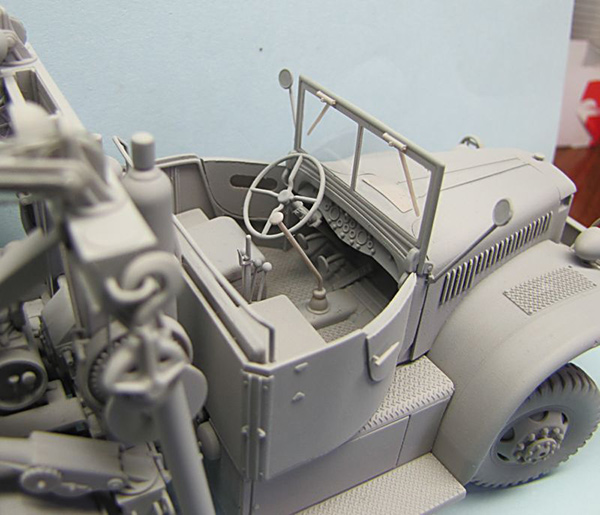 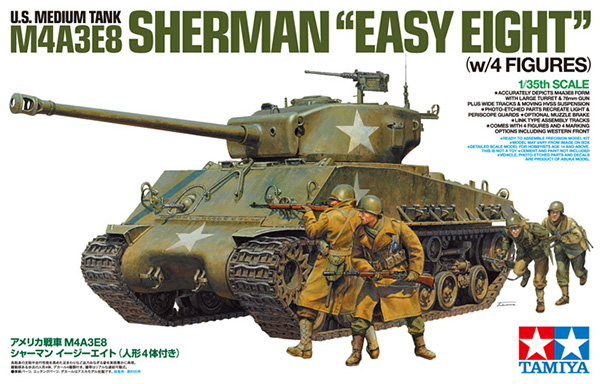 Featured in the movie Fury, the M4A3E8 Sherman "Easy Eight" is a great choice for Tamiya to release at this time.

The legendary U.S. tank M4 Sherman first went into production in February 1942, and would undergo a number of modifications in order to combat the powerful threat posed by its opposing German counterparts. One such variant was the March 1944 M4A3(76)W, which took the late production hull and its superior armor, fitting it with an effective 76mm anti-tank gun. While this extra weight ultimately proved the undoing of the (76)W, it provided the impetus for the development of the horizontal volute spring suspension (HVSS) which was married with wider tracks on the M4A3E8 "Easy Eight" for a smooth and easy drive. The Easy Eight missed the 1944 Normandy landings, but it was manufactured from August 1944 and took part in the Battle of the Bulge towards the end of the year. 2,500 were produced by September 1945, when its manufacture was halted.

After World War II, the U.S. kept the M4A3E8 Easy Eight in service with either the 76 mm gun or a 105 mm howitzer. The Sherman remained a common U.S. tank in the Korean War. Despite no longer being the primary US tank, it fought alongside the M26 Pershing and M46 Patton. The M4A3E8 Sherman and T-34-85 were comparable and could destroy each other when hit, although the use of HVAP shells gave the Sherman a firepower advantage. The Sherman had better optics, which gave it a better chance of scoring a first round hit.

The US Army replaced them with Pattons during the 1950s. The U.S. continued to transfer Shermans to its allies, which contributed to its widespread foreign use.

The 1:35 Sherman "Easy Eight" model was originally released by the Japanese model maker named Asuka Model (previously known as Tasca Model) in 2010. Now, it is packaged together with Tamiya-made figures and accessories in this exciting new kit. This incredibly detailed 1:35 scale model captures distinguishing characteristics on the M4A3E8 like the large turret with the 76mm gun, and the innovative HVSS setup. 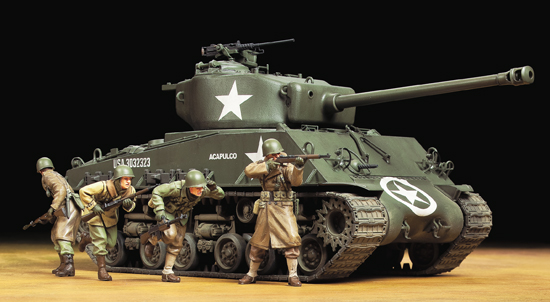 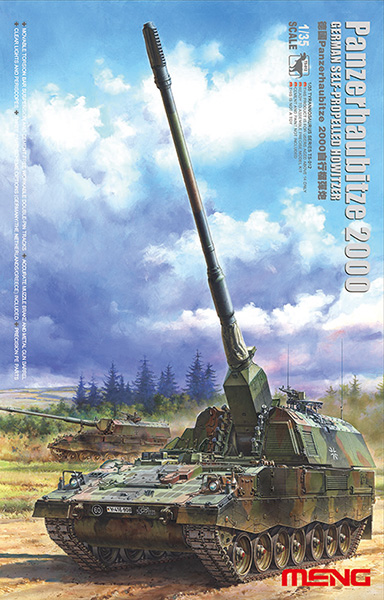 During WWII, Germany was the country which developed and equipped the most self- propelled guns, including the well-known Hummel and Grille. After WW II, Germany also actively developed new self-propelled guns to face with a more and more complicated world situation. In the late 1990s, the Panzerhaubitze 2000 appeared.

The Panzerhaubitze 2000 ("armoured-howitzer 2000"), abbreviated PzH 2000, is a German 155 mm self-propelled howitzer developed by Krauss-Maffei Wegmann (KMW) and Rheinmetall for the German Army. The PzH 2000 entered German Army service in 1998, and then into armies of Italy, the Netherlands and Greece. This vehicle utilizes a large number of chassis parts of Leopard 1 MBT and Leopard 2 MBT. It is powered by the MTU MT881 engine, which has excellent maneuverability. The PzH 2000 is equipped with one 155mm/L52 gun from Rheinmetall, with an advanced sight and fire-control system.

The PzH 2000 is one of the most powerful conventional artillery systems deployed in the last two decades. It is particularly notable for a very high rate of fire; in burst mode it can fire three rounds in 9 seconds, ten rounds in 56 seconds, and can—depending on barrel heating—fire between 10 and 13 rounds per minute continuously. The PzH 2000 has automatic support for up to 5 rounds of Multiple Rounds Simultaneous Impact (MRSI). The loading of shells is automated. Two operators can prepare and mount 60 shells and propelling charges vertically into the horseshoe magazine in less than 12 minutes. 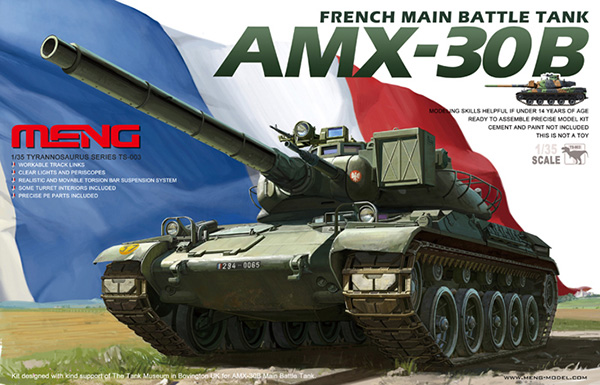 Meng has released a French NATO workhorse as a 1:35 scale plastic model kit.

The French AMX-30 is a main battle tank designed by GIAT, first delivered to the French Army in 1966. The first five tanks were issued to the 501st Régiment de Chars de Combat (Tank Regiment) in August of that year. The production version of the AMX-30 weighed 36 metric tons (40 short tons), and sacrificed protection for increased mobility. The French believed that it would have required too much armour to protect against the latest anti-tank threats, thereby reducing the tank's maneuverability. Protection, instead, was provided by the speed and the compact dimensions of the vehicle, including a height of 2.28 metres. It had a 105mm L/56 (4.1 in) rifled gun, firing an advanced high explosive anti-tank warhead known as the Obus G. The Obus G used an outer shell, separated from the main charge by ball bearings, to allow the round to be spin stabilized by the gun without affecting the warhead inside. Mobility was provided by the 720 horsepower (540 kW) HS-110 diesel engine, although the troublesome transmission adversely affected the tank's performance.

During the production run many improvements were implemented. These included gun stabilization from 1971, and from 1972 replacing the original coaxial heavy machine gun with a dual purpose 20-millimeter (0.79 in) autocannon against light armour and helicopters, with the ability to depress to -8 degrees and elevate to 40 degrees. All French army vehicles were eventually brought to this newer standard; the designation remained AMX 30B. 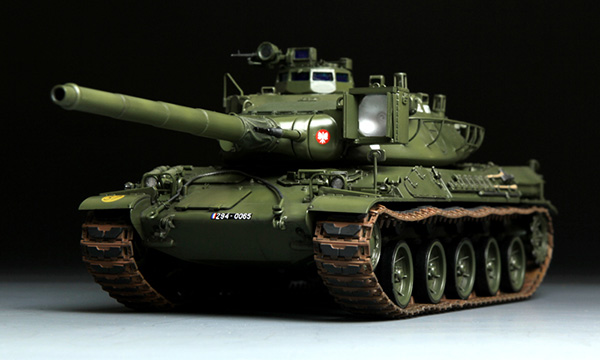 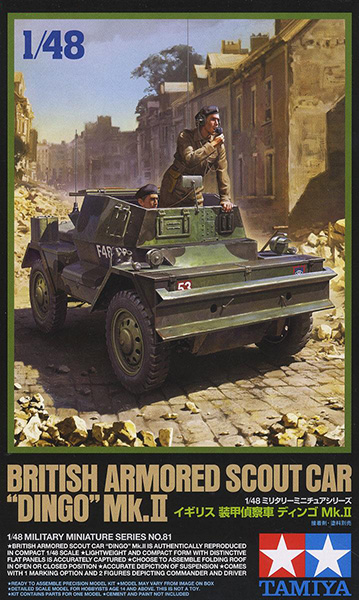 Arguably one of the finest armoured fighting vehicles built in Britain during the war, the Dingo was a small two-man armoured car, which was widely used for scout and command roles during WWII. It was well protected for its size with 30 mm of armour at the front. The 2.5 litre 55 hp engine was located at the rear of the vehicle.

One of the ingenious features of Dingo was the transmission; a pre-selector gearbox and fluid flywheel that gave five speeds in both directions. At first the earlier variants, produced as a scout car, had four-wheel steering; this gave it a tight turning circle of 23 ft (7.0 m). However inexperienced drivers found it difficult to control and so steering of the rear wheels was dropped for the Mk II production run at the cost of increasing the turning circle to 38 ft (12 m).

Mk IB - Reversed engine cooling air flow and revised armour grilles for the radiator.
Mk II - As the Mk IB, but with steering on the front wheels only and a revision of the lighting equipment. 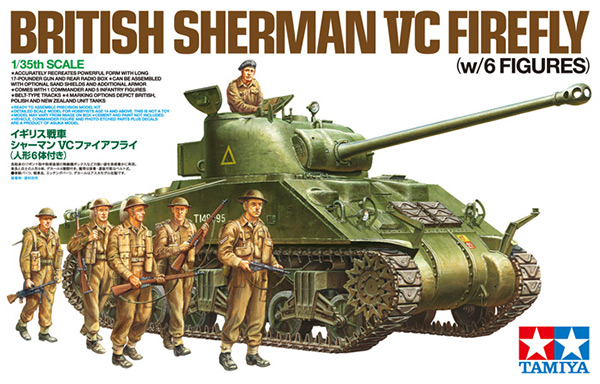 Tamiya brings us the penetrating power of the 17-Pounder on the Sherman VC Firefly tank in 1:35 scale with 6 figures of the tank commander and infantry support.

In the latter half of WWII, British troops ventured into battlefields populated with dangerous German foes such as the Tiger I and Panther, necessitating the development of their own powerful counterpart. It came in the form of the Sherman VC Firefly, which used the versatile U.S. tank M4 Sherman as a base for the big-hitting British 17-pounder gun. Even using conventional armor piercing rounds, the 17-pounder was capable of defeating the Tiger I's frontal armor at a range of 1 kilometer. In total over 2,000 Shermans were converted into Fireflies, their deployment in the days and months after the Normandy landings helping the Allied push on the Western front. 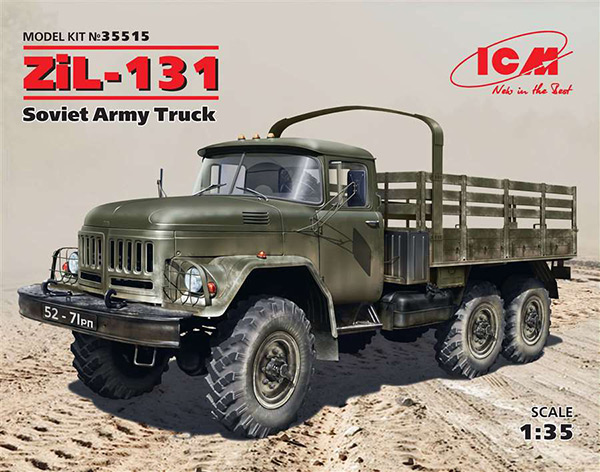 ICM has molded a modern era Sovier transport truck in 1:35 scale. The ZIL-131 is a general purpose 3.5 tons 6x6 army truck designed in the Soviet Union by ZIL and introduced in 1967. The basic model being a general cargo truck. Variants include a tractor-trailer truck, a dump truck, a fuel truck, and a 6x6 for towing a 4-wheeled powered trailer. The ZIL-131 also serves as a platform for the 9P138 rocket launcher, a 30-tube variant of the BM-21 "Grad". 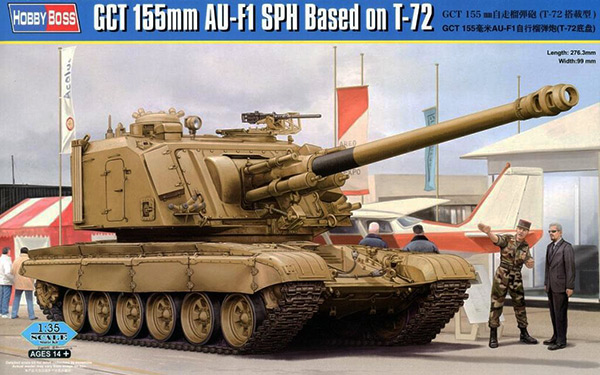 Hobby Boss has released a variant of a popular French self-propelled howitzer, the GCT 155mm AU-F1. While most of the AU-F1 and AU-F2 turrets were installed in AMX-30 chassis, with modifications these turrets were also installed on T-72 and other chassis like the Leopard 1 and Arjun.

This 1:35 scale kit models the T-72 chassis pairing and the parts come molded in khaki and gray. The kit includes 644 parts on 16 sprues and a 19 part photo-etch upgrade sheet. Other packed-in upgrades include a copper cable, copper wire, vinyl tube and two single piece vinyl tracks. 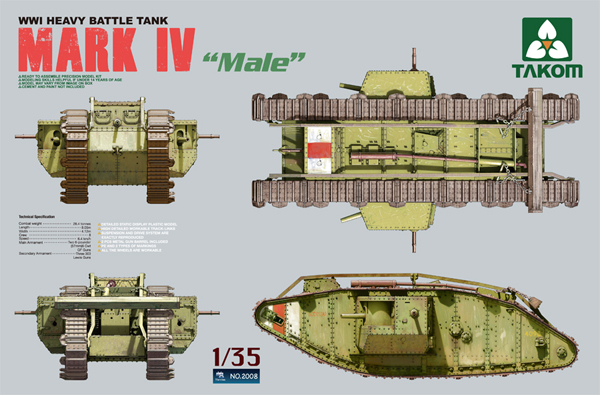 With significant WWI anniversaries being celebrated at this time, Takom brings us two highly detailed kits of the British Mark IV tanks in 1:35 scale.

The Mark IV "Male" version, equipped with 6 pdr guns, was used to cross through the German barbed wire and knock out bunkers, machine gun nests and artillery so the infantry could proceed. This faithfully accurate kit contains a photo etch set, a two metal barrels, individual track links, complete suspension and drive gear, trench crossing bar along with decals for 2 tanks.

The second new kit from TAKOM is the British MK.IV "Female" version equipped with Lewis machine guns. This tank was designed to follow the "Male" tanks through the barbed wire and flank the German infantry in the trenches. This kit has all the features of the first kit, except the 6 pdrs are replaced by a figure of a photographer.